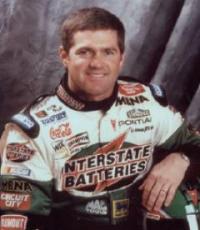 He was the first driver to win both the NASCAR NEXTEL Cup Championship (2000) and the NASCAR Busch Series championship (1991)
Fee Range: Contact Us
Secure Bobby Labonte
for Your Event

Even at the age of five, Bobby Labonte knew he was going to be a race car driver. Folks that watched him race quarter midgets then in his hometown of Corpus Christi, Texas, knew, as well.

His older brother, Terry, was also a prominent NASCAR driver; the two are the only brothers to have both won the championship in NASCAR's top series (the other family pairs to have titles, Lee and Richard Petty and Ned and Dale Jarrett, are father-son combinations).

Labonte was the first driver to win both the NASCAR Winston Cup championship (2000) and the NASCAR Busch Series championship (1991). He also won the IROC (International Race Of Champions) title in 2001.

Secure Bobby Labonte for Your Event

Based on your interest in Bobby Labonte as a speaker or for a personal appearance, Direct Sportslink has provided you additional links below for other sports talent with similar appearance fees, speaker topics, and categories that match Bobby Labonte.