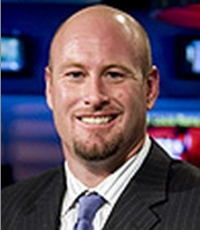 He was the starting quarterback for the Baltimore Ravens Super Bowl XXXV victory
Fee Range: $10,000 - $20,000
Secure Trent Dilfer
for Your Event

In his junior season, Dilfer led the nation in pass efficiency en route to being named the WAC Offensive Player of the Year. He also set the NCAA record for consecutive pass attempts without an interception. As a result, he was drafted by the Tampa Bay Buccaneers with their 1st pick in the 1994 NFL Draft.

The following season, Dilfer was the first Tampa Bay quarterback to ever go to the Pro Bowl. While with the Bucs, he won more games than any quarterback in franchise history and took the team to their first playoff game in 15 years.

As a member of the Baltimore Ravens, Dilfer went 3-0 in the playoffs, advancing the Ravens to Super Bowl XXXV in Tampa where they defeated the New York Giants.

After football, he has spent much of his time as a NFL analyst for NFL Network and ESPN.

He has a strong Christian faith, and continues to provide charity money and work in his spare time. He established TD4HIM, an organization in memory of his son Trevin, and he participates and hosts charity golf events to raise money for his alma mater Aptos High. He also paid for Aptos High's new turf field.

Secure Trent Dilfer for Your Event

Based on your interest in Trent Dilfer as a speaker or for a personal appearance, Direct Sportslink has provided you additional links below for other sports talent with similar appearance fees, speaker topics, and categories that match Trent Dilfer.