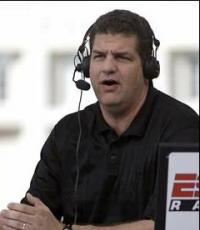 He is a co-host of ESPN Radio's Mike and Mike in the morning; He graduated from Notre Dame, where he was captain of the football team his senior season
Fee Range: $20,000 - $30,000
Secure Mike Golic
for Your Event

Mike Golic is a co-host of ESPN Radio's Mike and Mike in the Morning and a former defensive lineman in the NFL. He also serves as an analyst for ESPN and ESPN2's NFL studio programming, as well as for the networks' college football game coverage.

Golic is a 1985 graduate of the University of Notre Dame, majoring in finance and management. He served as captain of the football team during his senior season and also wrestled for the Irish.

Before working for ESPN, Golic was a nine-year NFL veteran, playing defensive tackle for the Houston Oilers, Philadelphia Eagles, and Miami Dolphins.

Golic has endorsed many products including national television commercials with Dr. Pepper, Subway and Nutrisystem.

Secure Mike Golic for Your Event

Based on your interest in Mike Golic as a speaker or for a personal appearance, Direct Sportslink has provided you additional links below for other sports talent with similar appearance fees, speaker topics, and categories that match Mike Golic.