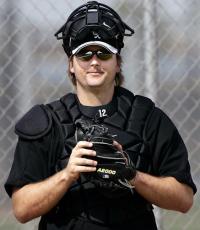 Pierzynski graduated from high school in 1994 and signed a letter of intent to play baseball at the University of Tennessee. He was also selected by the Minnesota Twins in the third round (71st overall) of that year's MLB Draft and chose to sign with the ballclub on June 9. He began his minor league career with the Gulf Coast League Twins and spent the next four years playing for the minor-league Elizabethton Twins, Fort Wayne Wizards, Fort Myers Miracle, New Britain Rock Cats, and Salt Lake Buzz.

After four years in the Twins organization, he was called up to the Major League team, and made his debut on September 9, 1998, when he was 22 years old. He then spent the next five seasons, through the 2003 season, with Minnesota, though he was not a regular starter until 2001. In 2002 he made the American League All-Star Team as a reserve catcher. After the 2003 season, the Twins traded Pierzynski to the San Francisco Giants. With the Giants he hit .272 with 11 homeruns and 77 RBI's.

Pierzynski was signed as a free agent by the Chicago White Sox on January 6, 2005.

Pierzynski caught Mark Buehrle's no-hitter on April 18, 2007 and Philip Humber's perfect game on April 21, 2012 against the Seattle Mariners at Safeco Field. A.J. was hired by Fox to be an analyst for the 2011 and 2012 MLB postseason on the pre-game and postgame show.

Secure A.J. Pierzynski for Your Event

Based on your interest in A.J. Pierzynski as a speaker or for a personal appearance, Direct Sportslink has provided you additional links below for other sports talent with similar appearance fees, speaker topics, and categories that match A.J. Pierzynski.