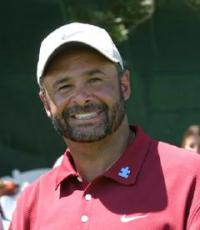 He was inducted into the Hockey Hall of Fame in 2003; He won five Stanley Cups with the Edmonton Oilers as a goaltender
Fee Range: $5,000 - $10,000
Secure Grant Fuhr
for Your Event 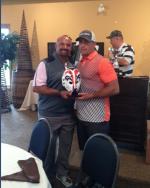 Direct Sportslink secured Grant Fuhr for his appearance and speaking engagement on behalf of IMH. Grant was positioned on a Par 3 taking photos with guests, playing best ball, and mingling with everyone. Once the golf was over he participated in their silent and live auction while giving a dinner speech to the group. A Canada sports celebrity legend, Grant's participation was well received. To secure Grant Fuhr for any personal appearance or speaking engagement please contact a Direct Sportslink booking agent for more information on Grant's availability and fee.

At the age of seventeen, in 1979, Fuhr joined the Victoria Cougars of the WHL. After two stellar seasons in Victoria, Fuhr was drafted 8th overall by the Edmonton Oilers in the 1981 NHL entry draft. He played for the Oilers for ten seasons, winning five Stanley Cups. In 1987, he won 40 games and made the All-Star game. In 1988, Fuhr won his only Vezina Trophy as the NHL's top goaltender.

From the late 80's to mid 90's Fuhr played with several teams, his best hockey coming in 1995-96 with the St. Louis Blues where he played an astounding 79 games in the season and set two notable records, namely the most games played by a goaltender in a season and the most consecutive starts by a goaltender.

During the 1999-2000 season, playing for the Calgary Flames, Fuhr became only the sixth goalie in NHL history to win 400 or more games. Shortly after, he retired. On July 22, 2004, he was hired by the Phoenix Coyotes as goaltender coach by Wayne Gretzky. Fuhr held the position until the end of the 2008-09 season. Wayne Gretzky has said on many occasions that he believes Fuhr is the greatest goaltender in NHL history.

Secure Grant Fuhr for Your Event

Based on your interest in Grant Fuhr as a speaker or for a personal appearance, Direct Sportslink has provided you additional links below for other sports talent with similar appearance fees, speaker topics, and categories that match Grant Fuhr.