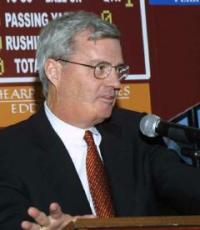 Beamer attended Virginia Tech and was a starting cornerback for 3 years on the football team, playing in the 1966 and 1968 Liberty Bowls. He graduated in 1969 and then attended Radford University for graduate school while serving as an assistant football coach at Radford High School.

After several coaching stints, Beamer was hired as Head Coach at Virginia Tech in 1987. Beamer took over the Hokies football program that was largely unsuccessful in its first century without him as Head Coach, reaching only six bowl games in that time span. Beamer built the Hokies into a perennially ranked team.

Secure Frank Beamer for Your Event

Based on your interest in Frank Beamer as a speaker or for a personal appearance, Direct Sportslink has provided you additional links below for other sports talent with similar appearance fees, speaker topics, and categories that match Frank Beamer.