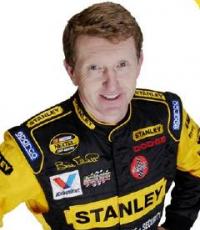 Warm and personable, Elliott is a perennial winner of NASCAR's most popular driver award. He began racing in the Winston Cup circuit during the 1976 season, but didn't claim his first victory until 1983, when he had 22 top-ten finishes in 30 races.

He currently drives the #91 Dodge Charger for Evernham Motorsports on a part-time basis with teammates Kasey Kahne, Jeremy Mayfield, and Scott Riggs. Elliott previously drove the #9 Dodge Dealers/UAW Dodge Intrepid for car owner Ray Evernham from 2001 to 2003 and won four events including the Brickyard 400 in 2002.

Throughout his career, Elliott has garnered 44 wins in the Cup series, including 2 victories in the Daytona 500, as well as one Busch Series win at Watkins Glen. Elliott is the current holder of the track qualifying record at Texas. Elliott also holds the track record at both Talladega and Daytona, neither of which is likely to be broken due to the current use of restrictor plates at both tracks. Also, he has won NASCAR's Most Popular Driver Award a record 16 times, which he last won in 2002. He withdrew his name from the ballot after that and the award will be renamed after Elliott when he officially retires from the sport.

Secure Bill Elliott for Your Event

Based on your interest in Bill Elliott as a speaker or for a personal appearance, Direct Sportslink has provided you additional links below for other sports talent with similar appearance fees, speaker topics, and categories that match Bill Elliott.