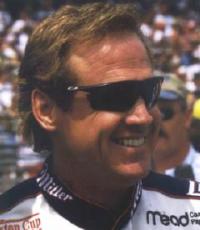 Wallace joined the Winston Cup circuit in 1984, winning Rookie of the Year honors. By 1989, Wallace had won the NASCAR Winston Cup Championship, beating out close friend and fierce rival Dale Earnhardt by twelve points. Rusty's first win came on April 6, 1986, at Bristol Motor Speedway, this would also become the site of his 50th career NASCAR win. Rusty had 55 NASCAR wins when he retired in 2005.

Off the track, Wallace is an avid pilot, owning several airplanes and a helicopter. He had also owned and operated Rusty Wallace, Inc., which fielded the #64 NASCAR Busch Series car driven by Jamie McMurray or Jeremy Mayfield. On August 30, 2004 Wallace announced that the 2005 NASCAR Nextel Cup season would be his last as a full-time driver.

On January 25, 2006, Rusty joined ESPN and ABC andcovered auto racing events, beginning with the IRL. Wallace's "Signature Design Speedway" in Iowa held its first race in 2007 and its first NASCAR race in 2009.

Secure Rusty Wallace for Your Event

Based on your interest in Rusty Wallace as a speaker or for a personal appearance, Direct Sportslink has provided you additional links below for other sports talent with similar appearance fees, speaker topics, and categories that match Rusty Wallace.