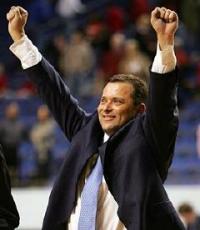 He is best known as turning the UTEP and Texas A&M men's basketball programs into contenders
Fee Range: $10,000 - $20,000
Secure Billy Gillispie
for Your Event

After leading both UTEP and Texas A&M to postseason appearances one year after poor seasons, Gillispie became the only college basketball coach to be in charge of the NCAA program with the biggest turnaround in two consecutive seasons.

In his three seasons at A&M, the Aggies achieved three consecutive 20-win seasons for the first time ever.

On April 6, 2007, the announcement was made that Gillispie had accepted the position of head coach for the University of Kentucky, a position which he held until 2009.

In 2011, Gillispie was named the Head Men's Basketball Coach at Texas Tech. He was replaced at Texas Tech with Tubby Smith in 2013.

Secure Billy Gillispie for Your Event

Based on your interest in Billy Gillispie as a speaker or for a personal appearance, Direct Sportslink has provided you additional links below for other sports talent with similar appearance fees, speaker topics, and categories that match Billy Gillispie.