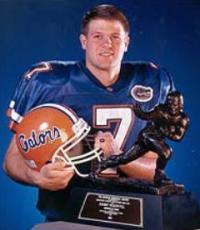 Wuerffel grew up in the Destin, Florida area and attended Fort Walton Beach Senior High School, leading the Vikings to an undefeated season as a senior while winning the Florida AAAA state football championship in 1991.

At the University of Florida, Wuerffel played quarterback for the Florida Gators, winning four consecutive Southeastern Conference titles between 1993 and 1996, and the 1996 National Championship in decisive fashion (52-20) over archrival Florida State University at the 1997 Nokia Sugar Bowl in New Orleans, Louisiana. He also won the Heisman Trohpy in 1996.

Wuerffel broke most quarterback records at the University of Florida and many in the NCAA during his career at UF. He was the first college athlete to win the Heisman and Draddy (for the NCAA student-athlete of the year) trophies in a single season (1996).

Wuerffel is a devout Christian, a member of the Presbyterian Church in America, and known for his character both on and off the field. Since retiring from football, he has been engaged in charitable work in New Orleans.

Secure Danny Wuerfful for Your Event

Based on your interest in Danny Wuerfful as a speaker or for a personal appearance, Direct Sportslink has provided you additional links below for other sports talent with similar appearance fees, speaker topics, and categories that match Danny Wuerfful.