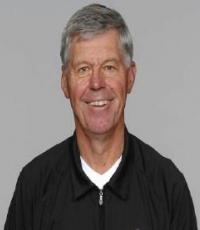 He was the first quarterback to lead the Cincinnati Bengals to the Super Bowl
Fee Range: $2,000 - $5,000
Secure Ken Anderson
for Your Event

After playing for and graduating from Augustana College (Illinois), Anderson was drafted 67th overall in the 1971 NFL Draft by the Cincinnati Bengals. He would become one of the most accurate short-range passers in the league, and was an extremely effective at rushing the ball for a quarterback. Because Bill Walsh was Ken's quarterbacks coach, Ken is considered to be one of the first quarterbacks to run what would become known as the "West Coast Offense."

One of the finest performances of his early career was in a 1975 Monday Night Football game against the Buffalo Bills. In the game, Anderson passed for a franchise record 447 yards while the Bengals racked up a franchise record 553 offensive yards on their way to a 33-21 win. It was the team's first ever win in a Monday night game.

During the 1981 season, Anderson completed 62.6% of his passes for 3,754 yards and 29 touchdowns, with only 10 interceptions leading the NFL with a career-high 98.4 passer rating. This performance earned him both the Associated Press and Professional Football Writers of America NFL Most Valuable Player Awards and the NFL Comeback Player of the Year Award. Anderson then lead the Bengals to their first ever playoff victory over the Buffalo Bills, and then he led Cincinnati to a 27-7 win in the AFC championship game (which later became known as the Freezer Bowl) over the San Diego Chargers, earning a trip to the first Super Bowl appearance in franchise history.

Furthermore, Ken was ranked 6th all-time for passing yards in a career at the time of his retirement. Ken's record for completion percentage in a season still stands over 20 years after his retirement. As of 2005, he was among the top 30 all-time leaders in pass attempts, completions, passing yards, and passing touchdowns. He led the NFL in passing yards and completions twice, and lead the league in fewest interceptions per pass attempt 3 times. He has been nominated for the Pro Football Hall of Fame several times.

Anderson led the NFL in Quarterback Rating 4 times during his career and led the league in passing yards twice. He was selected to 4 Pro-Bowls. Anderson was voted All-Pro in 1981, 2nd Team All-Pro in 1975 and 2nd Team All-AFC in 1974 & 1982. He has held numerous NFL coaching positions since retiring as a player.

Secure Ken Anderson for Your Event

Based on your interest in Ken Anderson as a speaker or for a personal appearance, Direct Sportslink has provided you additional links below for other sports talent with similar appearance fees, speaker topics, and categories that match Ken Anderson.