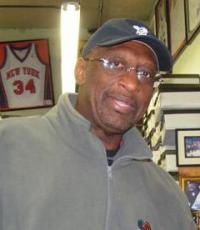 He is a member of the Pro Basketball Hall of Fame; His jersey is retired by both the Milwaukee Bucks and the Detroit Pistons
Fee Range: $5,000 - $10,000
Secure Bob Lanier
for Your Event

Bob Lanier was a three-time Converse All-America selection (1968-1970), and in 1970, he led St. Bonaventure to the NCAA Final Four, however, he was injured late in the regional championship game and did not participate in Bona's national semi-final loss to Artis Gilmore-led Jacksonville University. That year he was named Coach and Athlete Magazine player of the year, and the ECAC Player of the Year.

Lanier was drafted number one overall by the National Basketball Association's Detroit Pistons and was named to the All-Rookie Team following the 1970-71 season. He starred for Detroit until being traded to the Milwaukee Bucks in 1980. In his five seasons with the Bucks, they won the division championship each year. The same year he retired, in 1984, he was awarded the Oscar Robertson Leadership Award.

In his 14 NBA seasons, Lanier averaged 20.1 points and 10.1 rebounds per game while shooting a respectable 51.4 percent from the field. He played in eight NBA All-Star Games, and was named Most Valuable Player of the 1974 game. Lanier was inducted into the Basketball Hall of Fame and had his #16 jersey retired by both the Pistons and the Bucks.

During Lanier's NBA career, he had the largest feet of any player, requiring a size 22 shoe. Lanier could be seen showing his large feet in Miller Lite beer television ads from the 1980s which co-starred notable sports personalities including Bob Uecker, Sparky Lyle and John Madden. At the Basketball Hall of Fame in Springfield, Massachusetts, visitors are able to compare the size of their foot to that of Lanier's.

Since retiring, Bob has spent time working for the NBA.

Secure Bob Lanier for Your Event

Based on your interest in Bob Lanier as a speaker or for a personal appearance, Direct Sportslink has provided you additional links below for other sports talent with similar appearance fees, speaker topics, and categories that match Bob Lanier.