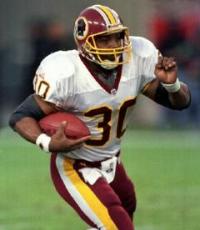 He is the all-time NFL leader in kickoff return yardage and punt return yards; He was a member of the Super Bowl XXVI Champion Washington Redskins team
Fee Range: $5,000 - $10,000
Secure Brian Mitchell
for Your Event

Mitchell may be best known for his unearthly instincts in evading open field tacklers. His body control and change-of-direction skills were top notch, and helped to make up for his lack of breakaway speed. Some observers may still remember his legendary half-spin move fake, in which he started a spin move but then returned to his former course, shaking a certain defender out of his shoes in the process.

He played college football at the University of Louisiana at Lafayette, where he was the lead quarterback, and was drafted by Washington in 1990 for special teams.

In just his second season with the Redskins, Mitchell led the NFL in punt return yards (600) and punt return touchdowns (2), assisting his team to a championship appearance in Super Bowl XXVI, where Washington defeated the Buffalo Bills 37-24. Mitchell continued to play for the Redskins until 1999, leading the NFL in punt return average (14.1) and touchdowns (2) in 1994, and making a Pro Bowl selection in 1995. In 2000, he joined the Eagles and played for them until 2002. After spending the 2003 season with New York, he was released by the Giants before the 2004 season. He then resigned to a one day contract for the Washington Redskins (a noble deal by Washington owner Dan Snyder which allowed Mitchell to retire as a Redskin), thus ending his stellar NFL career.

Since retiring, Mitchell has been a co-host of Redskins Post Game Live and ESPN 980AM.

Secure Brian Mitchell for Your Event

Based on your interest in Brian Mitchell as a speaker or for a personal appearance, Direct Sportslink has provided you additional links below for other sports talent with similar appearance fees, speaker topics, and categories that match Brian Mitchell.