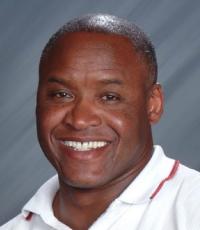 Darrin Nelson played halfback at Stanford University where he was the first player in NCAA history to rush for more than 1,000 yards and catch more than 50 passes in one season. He would accomplish the feat three times during his standout career at Stanford. A First-Team All-American, Nelson ended his career as Stanford’s all-time leader in rushing yards (4,033), receptions (214), scoring (242), and touchdowns (40), and he finished his career as the NCAA leader for all-purpose yards at 6,885. A four-time First-Team All-Pac-10 selection in Stanford history, he became the first freshman running back in conference history to rush for more than 1,000 yards in a season. A finalist for the Heisman Trophy, Nelson held nine of the top 12 single-game rushing performances in school history at the end of his career, and he led Stanford to wins in the 1977 Sun Bowl and 1978 Bluebonnet Bowl. Honored for his all-around achievements as an NFF National Scholar-Athlete in 1981, Nelson was also a First-Team Academic All-America and academic all-conference selection. He was inducted into the College Football Hall of Fame.

Darrin was selected in the first round of the 1982 NFL Draft by the Minnesota Vikings, Nelson played 11 seasons with the Vikings and San Diego Chargers. The Los Angeles native finished his professional career with 4,442 rushing yards, 2,559 receiving yards and 23 touchdowns, and he led the league with 4.9 yards per carry in 1987. A member of the Stanford Athletics Hall of Fame, Nelson was coached by Bill Walsh and Paul Wiggin (a College Football Hall of Fame player from Stanford), and he played alongside Hall of Famers John Elway and Ken Margerum. After his playing career he worked in the Athletics department as a Director for both Stanford and the University of California, Irvine.

Secure Darrin Nelson for Your Event

Based on your interest in Darrin Nelson as a speaker or for a personal appearance, Direct Sportslink has provided you additional links below for other sports talent with similar appearance fees, speaker topics, and categories that match Darrin Nelson.