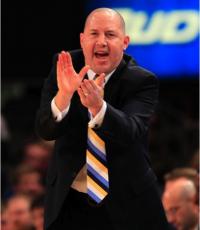 He was the Head Coach of the Marquette University Golden Eagles for many years before taking the Head Coach position at Virginia Tech
Fee Range: $10,000 - $20,000
Secure Buzz Williams
for Your Event

During the 2010-11 campaign, Williams led the Golden Eagles back to the Sweet Sixteen for the first time since 2003. His team went 22–15 including a 9–9 Big East record. They received an at-large bid in the 2011 NCAA Men's Division I Basketball Tournament where they defeated Xavier in the second round and Syracuse in the third round to advance to the Sweet Sixteen where they were defeated by North Carolina.

In 2014 he accepted the Head Coach position at Virginia Tech.

Secure Buzz Williams for Your Event

Based on your interest in Buzz Williams as a speaker or for a personal appearance, Direct Sportslink has provided you additional links below for other sports talent with similar appearance fees, speaker topics, and categories that match Buzz Williams.