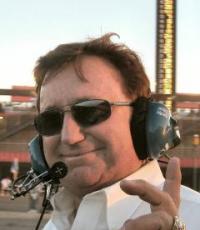 In 2001, he became the first team owner in NASCAR history to win all three of NASCAR's national championship series
Fee Range: $20,000 - $30,000
Secure Richard Childress
for Your Event

Agrium was looking for a coach, team leader, or sports business owner who could talk about adapting to change and bringing various business units together for a common goal. Richard Childress, a highly successful NASCAR team owner and businessman was the perfect speaker for the event.

Thank you Direct Sportslink for all your work on our behalf to secure Richard Childress. You made us feel very comfortable throughout the entire process and took care of all of the little details that resulted in a terrific speech. Richard was fantastic and a big hit with our group. Thanks again for all your efforts.

Childress is a former NASCAR driver and successful team owner in NASCAR Nextel Cup competition. As a business entrepreneur, Childress has become one of the wealthiest men in North Carolina.

He retired from driving in 1981 after Rod Osterlund sold his NASCAR team to J. D. Stacy, and Osterlund's driver, Dale Earnhardt, did not want to drive for Stacy. Childress, with recommendations from R. J. Reynolds Tobacco, chose to retire and put Earnhardt behind the wheel of his #3 car, complete with Wrangler Jeans sponsorship.

That first alliance lasted for the season. Ricky Rudd was hired in 1982 and drove for two years, giving Childress his first career victory in June 1983 at Riverside, California. Earnhardt returned for the 1984 season, and together with Childress formed one of the most potent combinations in NASCAR history. They won championships in 1986, 1987, 1990, 1991, 1993, and 1994.

In the mid-90s, Childress began expanding his racing empire, fielding entries in the Busch Series and Craftsman Truck Series. He also expanded to a two-car operation in what is now known as Nextel Cup, with driver Mike Skinner driving the #31. In the first part of the 2000s, he expanded to three cars, with the #30 car driven by Jeff Green.

Tragically, Earnhardt would be killed in the 2001 Daytona 500 on the last lap. Childress promoted Busch driver Kevin Harvick to drive the renumbered #29. Harvick would win in only his third start, at the Atlanta Motor Speedway.

Most recently, RCR won the 2008 Nationwide Series Championship with Clint Bowyer piloting the #2.

Secure Richard Childress for Your Event

Based on your interest in Richard Childress as a speaker or for a personal appearance, Direct Sportslink has provided you additional links below for other sports talent with similar appearance fees, speaker topics, and categories that match Richard Childress.