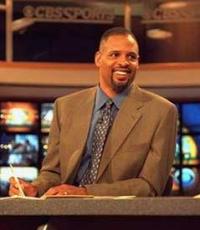 A former first round pick by the Indiana Pacers in the NBA, he is best known for his years as a college basketball analyst
Fee Range: $5,000 - $10,000
Secure Clark Kellogg
for Your Event

From 1979-82, Kellogg played for Ohio State University, where he earned All-Big Ten Conference and Most Valuable Player honor. In 1982, Kellogg was the 1st round draft pick of the Indiana Pacers. He played five seasons for the Pacers before chronic knee problems forced him to retire.

In 1990, he joined ESPN as a basketball analyst. He also worked for the Big East Network and Prime Sports. Kellogg also began working as a television analyst for the Indiana Pacers.

During the 2012 NCAA men's tournament, the Ohio Bobcats, for whom Kellogg's son, Nick, played, advanced to the Sweet Sixteen round at the same time Kellogg was calling another tournament game elsewhere. Kellogg, in an understandable digression from his impartiality as a commentator, exclaimed "Way to go Bobcats!" when the final score rolled on his monitor.

Kellogg's voice appeared in the popular NBA video game NBA 2K10 as the color commentator alongside Kevin Harlan. The pair rejoined for the game NBA 2K11 as well as NBA 2K12 (with Steve Kerr).

Secure Clark Kellogg for Your Event

Based on your interest in Clark Kellogg as a speaker or for a personal appearance, Direct Sportslink has provided you additional links below for other sports talent with similar appearance fees, speaker topics, and categories that match Clark Kellogg.