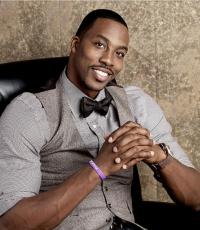 He was part of the 2008 gold medal winning USA Olympic team; He was the 2008 NBA Slam Dunk Champion
Fee Range: Contact Us
Secure Dwight Howard
for Your Event 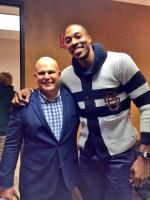 Direct Sportslink secured Houston Rockets star Dwight Howard for our client, The Woodlands Christian Church for a series of christian motivational talks. Dwight agreed to both live personal appearances on different weekends and a recorded interview during the NBA season with Pastor Kerry Shook. Dwight shared his testimony of coming to faith in Jesus Christ, and how an encounter with what he believes was the voice of God solidified his course to the NBA.

Howard, a seven-time All-Star who joined the Houston Rockets in July of 2013 after a brief stint with the L.A. Lakers and eight years with the Orlando Magic, spoke with Pastor Shook on the issue of divine guidance and honoring God in every area of one's life. "He's honoring God with his talents in a major way," Shook said while introducing the 28-year-old Atlanta native to those at the Houston-area megachurch and others watching via a live online stream.

Howard, who usually plays center but can also play power forward, had an outstanding high school career at Southwest Atlanta Christian Academy. He chose to forgo college and entered the 2004 NBA Draft, and was selected first overall by the Magic. Over his career as an All-Star, All-NBA team selection, All-Defensive team member, and Defensive Player of the Year, Howard has been ranked consistently as one of the best in the league in rebounds, blocks, field goal percentage and free throw attempts, and has set numerous franchise and league records. He led the Orlando Magic to multiple division and conference titles, and he was the winner of the 2008 NBA Slam Dunk Contest. In the 2008 Olympics, he was the starting center for Team USA, which went on to win the gold medal.

Before he was drafted in 2004, Howard said that he wanted to use his NBA career and Christian faith to "raise the name of God within the league and throughout the world". In November 2009, he was named one of the 10 finalists for the Jefferson Awards for Public Service, which awards athletes for their charitable work. Howard once said, “I have a great opportunity to become one of the best big men to ever play the game. But I want my legacy to be bigger and better off the court than it is on the court. Basketball is just a platform for all the great things that I want to do in life.”

Secure Dwight Howard for Your Event

Based on your interest in Dwight Howard as a speaker or for a personal appearance, Direct Sportslink has provided you additional links below for other sports talent with similar appearance fees, speaker topics, and categories that match Dwight Howard.