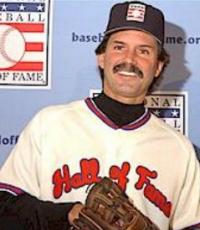 The right-handed Eckersley had two very successful careers in baseball, as a starting pitcher from 1975 through 1986 and as a reliever from 1987 until his retirement after the 1998 season.

Eckersley became a full-time starter with the Cleveland Indians in 1975, his first major league season. After winning 40 games in three years, including a no-hitter against the California Angels on May 30, 1977, he was traded to the Boston Red Sox in 1978 and had a 20-8 record with a 2.99 ERA. He remained with Boston until 1984, when he was traded during the season to the Chicago Cubs.

In the 1988 league championship series, Eckersley saved every game as Oakland swept Boston. Unfortunately, he may be best remembered for the game-winning home run he gave up to the hobbled Kirk Gibson of the Los Angeles Dodgers in the first game of the World Series that year. The heavily favored Athletics lost the series in five games.

Eckersley went to the St. Louis Cardinals as a free agent in 1996. He finished his career back with the Red Sox in 1998. He was elected to the Baseball hall of Fame in 2004.

Secure Dennis Eckersley for Your Event

Based on your interest in Dennis Eckersley as a speaker or for a personal appearance, Direct Sportslink has provided you additional links below for other sports talent with similar appearance fees, speaker topics, and categories that match Dennis Eckersley.