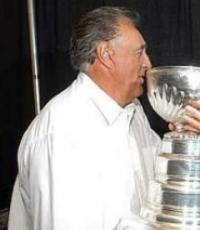 Esposito joined the Chicago Blackhawks in the 1964 season, and centering for the great Bobby Hull for four seasons, proved himself a quality playmaker, twice finishing amongst the league leading scorers.

In 1967, he was dealt to the Boston Bruins in a blockbuster trade along with Ken Hodge and Fred Stanfield. Esposito blossomed into the greatest scorer of his day, where he became the first NHL player to score 100 points in a season with 126 in the 1969 season. He went on to top the 100 point mark six times in all, including five consecutive seasons between 1971 and 1975.

Esposito was named to the NHL's First All-Star team six consecutive times (from 1969 to 1974), and won the Hart Trophy as the league's MVP in 1969 and 1974. His Boston fans printed and displayed bumper stickers during his best years to celebrate his scoring: they read, "Jesus saves, Espo scores on the rebound." Esposito, while not being a fast or graceful skater, was best known for his unmovable presence in front of the opposition net from which he could score from all angles. During these great years, centering one of the most renowned forward lines in league history with Hodge and left winger Wayne Cashman, Esposito and fellow superstar Bobby Orr led the Bruins to Stanley Cup victories in 1970 and 1972, and first place finishes in the league in 1971, 1972, and 1974.

He retired in 1981, then only second to Gordie Howe in career goals and total points, and subsequently becoming a broadcaster.

He served as general manager and coach for the Rangers for three years in the mid 1980s, where he earned the nickname "Trader Phil" for the numerous transactions he made while holding that office. He moved on to found the NHL's Tampa Bay Lightning -- where his reputation and force of personality was widely credited with winning the expansion bid for Tampa Bay -- in 1992, serving as the team's president and general manager until 1998. Since 1998 he has been involved with the franchise for many years.

Secure Phil Esposito for Your Event

Based on your interest in Phil Esposito as a speaker or for a personal appearance, Direct Sportslink has provided you additional links below for other sports talent with similar appearance fees, speaker topics, and categories that match Phil Esposito.