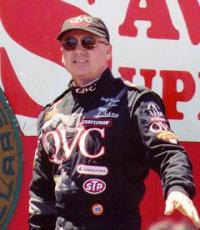 Geoffrey Bodine is the oldest of the three Bodine brothers (Brett Bodine and Todd Bodine) who are all NASCAR drivers.

Bodine's racing career seemed to be on track right from the start as his father and grandfather, Eli Bodine Jr. and Sr. built Chemung Speedrome just a year after he was born. He began learning his racing skills at only 5 years old.

Bodine is best known for his NASCAR Winston Cup (now Nextel Cup) career. His first full season in Winston Cup came in 1982 when he earned the Rookie of the Year title. Geoff's biggest win came at the 1986 Daytona 500. Other career highlights include the 1987 International Race of Champions championship, the 1992 Busch Clash, the 1994 Winston Select and the 1994 Busch Pole award.

Throughout his career Geoff has driven for some of the best car owners in NASCAR, including Junior Johnson, Bud Moore and Rick Hendrick as well as owning his own cars. He has 565 starts, 37 poles, 18 wins, and nearly $16 million in winnings. He was honored as one of "NASCAR's 50 Greatest Drivers" during NASCAR's 50th anniversary celebration. Geoff has always been a great innovator and brought many ideas to Winston Cup. He introduced power steering and full-faced helmets to Winston Cup.

Secure Geoff Bodine for Your Event

Based on your interest in Geoff Bodine as a speaker or for a personal appearance, Direct Sportslink has provided you additional links below for other sports talent with similar appearance fees, speaker topics, and categories that match Geoff Bodine.