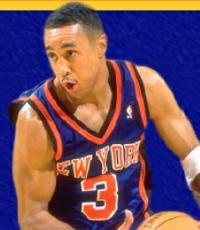 John Starks for WFZ Hoops (3on3)

WFZ Hoops was looking for a New York sports celebrity to increase awareness for their tournament and fundraiser. John was able to say a few words of encouragement to the participants, sign autographs and take pictures with everyone playing. His appearance made for a fantastic event.

Starks signed his first contract with the Golden State Warriors as a free agent on September 29, 1988.  Although he received little playing time and was cut from the Warriors after one season he never gave up on his dream of playing again in the NBA.  John was determined to continue his journey towards a solid NBA career.  Starks played for the CBA and WBL, becoming an All-Star in both leagues, which caught the eye of a New York Knicks scout. After an impressive tryout, Starks signed his second, and most important, NBA contract with the New York Knicks.

During his outstanding eight (8) year career with the New York Knicks, Starks was named to the NBA All-Defensive Second Team in 1992-1993, became an NBA All-Star in 1994, and was awarded the League's Sixth Man of the Year in 1996-1997. He averaged 14.1 points per game, while leading the Knicks in three point goals (982). In the final minute of New York's win over Chicago in Game 2 of the 1993 Eastern Conference Finals, Starks performed one of the most memorable "highlight" plays in team history - "The Dunk". In that same year, the John Starks Foundation was established to provide positive opportunities for disadvantaged youngsters and communities.

After his tenure with the Knicks, Starks played again for the Golden State Warriors (1998 through 2000), shortly for the Chicago Bulls (1999-2000) and then for the Utah Jazz (2000 -2002). In each NBA city, John was dedicated to the team's community outreach efforts and volunteered his time and support when needed.

In 2003, Starks was named Alumni and Fan Development Advisor for the New York Knicks. Starks has been involved in the day-to-day efforts to expand the Knicks Alumni Relations, Community Relations and Fan Development Programs. In addition, he has also served as a pre-and-post-game analyst on MSG Network's home Knicks game coverage.

John and his family reside in Stamford, CT. When not routing for the Knicks, John spends time with his family, playing golf and working on his Foundation's agendas.His autobiography, John Starks: My Life was released in the fall of 2004.

Secure John Starks for Your Event

Based on your interest in John Starks as a speaker or for a personal appearance, Direct Sportslink has provided you additional links below for other sports talent with similar appearance fees, speaker topics, and categories that match John Starks.