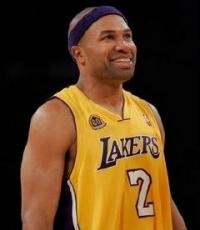 He is one of the most popular Lakers players of all-time; He played on five NBA Championship teams with the Lakers
Fee Range: $10,000 - $20,000
Secure Derek Fisher
for Your Event

As a point guard for the University of Arkansas at Little Rock for four years, Fisher concluded his collegiate career second on the school's all-time lists in points (1,393), assists (472) and steals (189). He averaged 12.4 points, 4.4 rebounds and 4.2 assists over 112 games and consistently led the team in assists and steals every year. Fisher also set a school record for free throws made in a career (399) and ranked 3rd among all-time UALR leaders in three-point field goals made (125). As a senior, he earned Sunbelt Conference Player of the Year honors.

The Los Angeles Lakers selected Fisher with the 24th overall pick in the 1996 NBA Draft. Fisher won back-to-back-to-back NBA championships with the Lakers in the 2000, 2001, and 2002 seasons. One of Fisher's finest playoff moments came in Game 5 of the 2004 Western Conference semi-finals between the Lakers and the defending champion San Antonio Spurs. Fisher successfully made the game-winning basket to defeat the Spurs with only 0.4 remaining on the clock. Fisher was nicknamed "The Fish That Saved L.A." for the play and was credited with salvaging the team's championship run.

In 2010, he won his fifth NBA Championship with the Lakers. Only he and Kobe Bryant have played in all five of the Lakers' most recent championships. In 2012 he was traded to the Oklahoma City Thunder.

Secure Derek Fisher for Your Event

Based on your interest in Derek Fisher as a speaker or for a personal appearance, Direct Sportslink has provided you additional links below for other sports talent with similar appearance fees, speaker topics, and categories that match Derek Fisher.