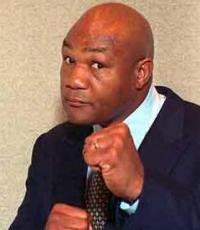 Foreman had only eighteen amateur fights before he won the Olympic gold medal as a heavyweight in 1968. He also won immediate fame by parading around the ring holding a small U. S. flag after his victory; the scene was captured on live television from Mexico City and the photo appeared in newspapers across the country.

He became a professional in June of 1969 and won his first 34 fights to gain a shot at the heavyweight championship against Joe Frazier. Thirty-one of those victories came on knockouts, 29 of them before the 6th round. Foreman knocked the champion down six times in less than two round to win the title.

After a series of exhibitions in 1975, Foreman won his next five fights by knockout but he retired after losing a 12-round decision to Jimmy Young in 1977. Ten years later, he came out of retirement and knocked out thirteen opponents before meeting Evander Holyfield for the heavyweight title in 1991. Holyfield retained the championship with a 12-round decision.

He returned to the ring in 1994, after being away for nearly a year and half, and became the oldest champion ever in any weight division by knocking out Michael Moorer in the 10th round of their IBF/WBA heavyweight title fight on Nov. 5.

However, Foreman held the joint title only briefly. Because he refused to fight top-rated contender Tony Tucker, the WBA stripped him of that title on March 4, 1995. When the IBF insisted that Foreman should give Axel Schulz a rematch, he relinquished that title.

Foreman has been very much in the public eye as the TV spokesman for the George Foreman Grill. He has also served as a commentator on HBO's "World Championship Boxing."

Secure George Foreman for Your Event

Based on your interest in George Foreman as a speaker or for a personal appearance, Direct Sportslink has provided you additional links below for other sports talent with similar appearance fees, speaker topics, and categories that match George Foreman.