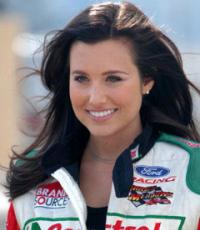 She is one of the most popular NHRA personalities
Fee Range: Contact Us
Secure Ashley Force
for Your Event

On April 27, 2008, Force earned her first ever NHRA professional win, defeating her father in the final round, and becoming the first woman to earn a win in the Funny Car class at the NHRA Summit Southern Nationals held at the Atlanta Dragway in Commerce, Georgia.

Force garnered the second win of her career on March 29, 2009 at the O'Reilly NHRA Spring Nationals; in the finals she beat her former instructor Jack Beckman.

Secure Ashley Force for Your Event

Based on your interest in Ashley Force as a speaker or for a personal appearance, Direct Sportslink has provided you additional links below for other sports talent with similar appearance fees, speaker topics, and categories that match Ashley Force.