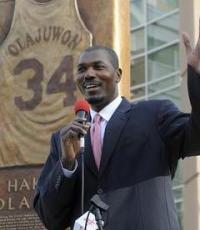 He made 3 Final Four appearances during his stellar collegiate career at Houston; He is one of the greatest centers to ever play professional basketball; He was enshrined into the Naismith Memorial Basketball Hall of Fame in 2008
Fee Range: $20,000 - $30,000
Secure Hakeem Olajuwon
for Your Event

Olajuwon traveled from his home country of Nigeria to play collegiately for the University of Houston. Hakeem had a standout career for the Cougars alongside future NBA Hall of Fame player Clyde "The Glide" Drexler, which included three trips to the Final Four and ended with the retirement of his jersey number.

Olajuwon was drafted by the Houston Rockets with the first overall selection of the 1984 NBA Draft, a draft that included Michael Jordan, Charles Barkley, Sam Bowie and John Stockton. He is affectionately known as Hakeem "The Dream" Olajuwon.

During his illustrious NBA career, Olajuwon has racked up many accolades. In back-to-back years (1994 & 1995), he was an NBA Champion and an NBA Finals MVP, also achieving league MVP honors in '94. Hakeem was twice the NBA's Defensive Player of the Year (1993, 1994), making the NBA All-Defensive First Team five times. Olajuwon made the NBA All-Star team 12 times, and won Olympic gold in 1996, the same year in which he was named one of the 50 Greatest Players in NBA History.

In 2008, Olajuwon was elected to the Naismith Memorial Basketball Hall of Fame.

Secure Hakeem Olajuwon for Your Event

Based on your interest in Hakeem Olajuwon as a speaker or for a personal appearance, Direct Sportslink has provided you additional links below for other sports talent with similar appearance fees, speaker topics, and categories that match Hakeem Olajuwon.