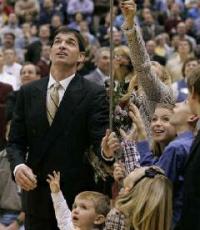 He was a member of the 1992 and 1996 Olympic team; He was a ten time All Star; He was inducted into the Naismith Memorial Basketball Hall of Fame in 2009
Fee Range: Contact Us
Secure John Stockton
for Your Event

Stockton is considered one of the NBA's greatest point guards as he averaged a career double-double, with 13.1 points and 10.5 assists per game. As of 2005, he held the NBA's records for career assists (15,806) and career steals (3,265). He had five of the top six assists seasons in NBA history. He has held the NBA record for the most seasons and consecutive games played with one team, and is second in total games played. He missed only 22 games during his career, 18 of them in one season.

In Stockton's 19 year career, he appeared in 10 All-Star games, and was named co-MVP of the All Star Game in 1993.. He played with the 1992 and 1996 US Olympic basketball teams, known as Dream Teams I and II, the first Olympic squads to feature NBA players. He was selected to the All-NBA First Team twice, the Second Team six times, the Third Team three times, and the All-Defensive Second Team five times. He was named one of the 50 Greatest Players In NBA History in 1996. Stockton's career highlight came in Game 6 of the Western Conference Finals, in which he hit the winning shot over Houston to send the Jazz to its first NBA Finals.

On April 6, 2009, Stockton was inducted into the Naismith Memorial Basketball Hall of Fame.

Secure John Stockton for Your Event

Based on your interest in John Stockton as a speaker or for a personal appearance, Direct Sportslink has provided you additional links below for other sports talent with similar appearance fees, speaker topics, and categories that match John Stockton.