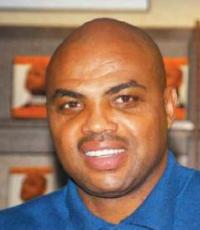 He is considered one of the greatest NBA players ever; He was a member of the U.S. 1992 Olympic Gold Medal winning men's basketball team
Fee Range: $50,000 - $75,000
Secure Charles Barkley
for Your Event

At Auburn University, Barkley's weight often ballooned over 300 pounds and he was nicknamed the "Round Mound of Rebound." He entered the NBA draft in 1984, after his junior season, and was chosen by the Philadelphia 76ers in the first round as the fifth pick overall. Barkley made the league's all-rookie team, averaging 14.0 points a game.

Often criticized by teammates during his early years because of inconsistent play and temper tantrums, Barkley came into his own during the 1987-88 season, when he kept his weight consistently at 252 pounds, averaged 28.3 points a game, and was named to the All-NBA team for the first of four consecutive years.

After playing for the U. S. "Dream Team" that won the 1992 Olympic gold medal, Barkley was sent to the Phoenix Suns for three players. he averaged 25.6 points a game and won the NBA MVP award as the Suns went to the NBA finals, only to lose to Michael Jordan and the Chicago Bulls.

At the time of retirement, Barkley ranked 13th on the NBA's all-time scoring list and 15th in rebounds. At the time of his retirement, he was one of only four players, with Kareem Abdul-Jabbar, Wilt Chamberlain and Karl Malone, to have record more than 23,000 points, 12,000 rebounds and 4,000 assists.

Secure Charles Barkley for Your Event

Based on your interest in Charles Barkley as a speaker or for a personal appearance, Direct Sportslink has provided you additional links below for other sports talent with similar appearance fees, speaker topics, and categories that match Charles Barkley.