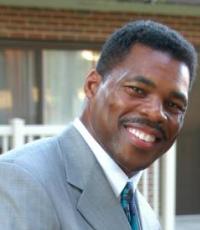 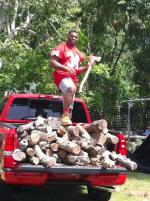 It was a pleasure to work with you for our 2012 Leadership Conference. Herschel Walker exceeded our expectations and we are very pleased with everything. Thanks again for being on-site in Florida to make sure everything went so well.

Walker's freshman season at the University of Georgia in 1980 is widely regarded as one of the best seasons ever by a first year player. His college career is also widely considered to have been one of the best in American college football history. In its list of the 100 greatest college football players ever, CollegeFootballNews.com placed Walker at #2.

Walker signed with the New Jersey Generals of the USFL in 1983, owned by flamboyant real estate entrepreneur Donald Trump. Although this move was challenged in court by the NFL, Walker (and Trump) prevailed and Walker began play with the Generals, winning the USFL rushing title in both 1983 and 1985 and in the latter year also gaining over 2,000 yards. He holds the Pro Football Record for Single-Season Rushing Yards with 2411 in 1985.

The NFL's Cowboys suspected that the USFL was not going to last. They acquired Walker's NFL rights by selecting him in the fifth round of the 1985 draft. When the USFL in fact succumbed after its essentially unsuccessful antitrust suit against the NFL in 1986, Walker went to play for the Cowboys, eventually establishing himself as a premier NFL running back with two consecutive Pro-Bowl seasons (1987,1988). In 1989, at the height of his NFL career, the Cowboys traded his rights to the Minnesota Vikings in exchange for a total of five players. This was judged to be one of the seminal events in the return of the Cowboys to the top echelon of the NFL.

Walker was a highly popular and visible personality, even in his college days, as evidenced by the fact that both a thoroughbred and a standardbred race horse were named after him, the former while he was still in college; the thoroughbred, whose name was officially spelled as a single word "Herschelwalker" broke the track record for 5 furlongs at Belmont Park in his first start.

Secure Herschel Walker for Your Event

Based on your interest in Herschel Walker as a speaker or for a personal appearance, Direct Sportslink has provided you additional links below for other sports talent with similar appearance fees, speaker topics, and categories that match Herschel Walker.