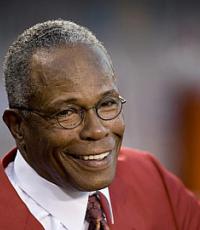 A Rod Carew personal appearance, Rod Carew speaking engagement, or Rod Carew endorsement will reflect well on your company. To hire Rod Carew now for any corporate appearance, fundraiser, motivational speaker event, personal appearance, autograph signing, or website endorsement please contact our celebrity agents at 1-877-6-SPORTS. We will contact Rod Carew or contact Rod Carew's agent and provide you with the booking fees and availability immediately upon your request. Direct Sportslink is the only sports speakers bureau and talent booking agency based in the United States securing only sports talent for corporations, associations, and organizations for motivational speaking engagements, personal appearances, and endorsements. We are the premier sports celebrity booking agency and a sports celebrity procurement expert. Accordingly, we will provide you with any relevant Rod Carew website information and booking agent details so that you can hire Rod Carew for your next event.

Carew won the American League's Rookie of the Year award in 1967 as a Twin and was elected to the first of 18 consecutive All-Star game appearances. In 1972, Carew led the American League in batting, hitting .318, and remarkably, without hitting a single home run for the only time in his career. As of 2012, Carew is the only player in the American League or in the modern era to win the batting title with no home runs. In 1975, Carew joined Ty Cobb as the second player to lead both the American and National Leagues in batting average for three consecutive seasons.

Seeing time predominantly at second base early in his career, Carew moved to first base in September 1975 and stayed there for the rest of his career. On February 3, 1979, Carew was traded to the Angels.

Carew was elected to the Baseball Hall of Fame in 1991, his first year of eligibility, the 22nd player so elected. In 1999, he ranked #61 on The Sporting News'' list of 100 Greatest Baseball Players, and was nominated as a finalist for Major League Baseball's All-Century Team. Carew has also been inducted into the Hispanic Heritage Baseball Museum Hall of Fame.

Secure Rod Carew for Your Event

Based on your interest in Rod Carew as a speaker or for a personal appearance, Direct Sportslink has provided you additional links below for other sports talent with similar appearance fees, speaker topics, and categories that match Rod Carew.