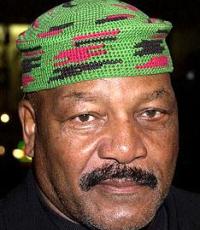 He is one of the greatest NFL running backs ever; He is a member of the Pro Football Hall of Fame and Lacrosse Hall of Fame
Fee Range: $30,000 - $40,000
Secure Jim Brown
for Your Event

A Jim Brown personal appearance, Jim Brown speaking engagement, or Jim Brown endorsement will reflect well on your company. To hire Jim Brown now for any corporate appearance, fundraiser, motivational speaker event, personal appearance, autograph signing, or website endorsement please contact our celebrity agents at 1-877-6-SPORTS. We will contact Jim Brown or contact Jim Brown's agent and provide you with the booking fees and availability immediately upon your request. Direct Sportslink is the only sports speakers bureau and talent booking agency based in the United States securing only sports talent for corporations, associations, and organizations for motivational speaking engagements, personal appearances, and endorsements. We are the premier sports celebrity booking agency and a sports celebrity procurement expert. Accordingly, we will provide you with any relevant Jim Brown website information and booking agent details so that you can hire Jim Brown for your next event.

Considered by many the greatest running back in history, Jim Brown was also an exceptional all-around athlete. As a teen-ager, he turned down an offer to play baseball in the New York Yankee organization and, after graduating from Syracuse University, he turned down $150,000 to become a professional fighter. While in high school, he once jogged over from a pre-game lacrosse to win the high jump in a track meet.

In his senior year in high school in Manhasset, Long Island, he averaged 38 points a game in basketball and 14.9 yards per carry as a football player. He was an All-American in both lacrosse and football and he also started at center in basketball for three years at Syracuse. In his last regular season football game, he scored 43 points against Colgate, and he had 21 in Syracuse's 28-27 loss to Texas Christian in the 1957 Cotton Bowl.

Brown joined the NFL's Cleveland Browns in 1957 and was named rookie of the year after gaining 942 yards on 202 carries. He set a single-game record of 237 yards against the Los Angeles Rams, scoring 4 touchdowns, that season.

During the next eight seasons, Brown rushed for more than 1,000 yards seven times, falling short by only 4 yards in 1962. He led the league in rushing every season he played except 1962, when he was edged out by Jim Taylor of the Green Bay Packers. Brown also led in rushing touchdowns from 1957 through 1959, in 1963, and in 1965.

While making a movie during the summer of 1966, Brown made the surprising announcement that he was retiring from football to concentrate on acting. He was just thirty years old. In his 8 seasons, he rushed 2,359 times for 12,312 yards, a 5.2 average, and rushed for 106 touchdowns. He also caught 262 passes for 2,499 yards and 20 touchdowns and returned 29 kickoffs for 648 yards, a 22.3 average.

Secure Jim Brown for Your Event

Based on your interest in Jim Brown as a speaker or for a personal appearance, Direct Sportslink has provided you additional links below for other sports talent with similar appearance fees, speaker topics, and categories that match Jim Brown.