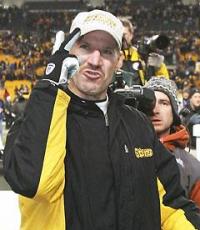 He was the Head Coach of the Super Bowl XL Champion Pittsburgh Steelers
Fee Range: $40,000 - $50,000
Secure Bill Cowher
for Your Event

Bill Cowher excelled in football, basketball, and track for Carlynton High in Crafton, Pennsylvania, a suburb of Pittsburgh, less than five miles from Heinz Field. At North Carolina State University, Cowher was a starting linebacker, team captain, and team MVP in his senior year. He graduated in 1979 with an education degree.

He began his NFL career as a player. He was a free-agent linebacker with the Philadelphia Eagles in 1979, and then signed with the Cleveland Browns the following year. Cowher played three seasons (1980-82) in Cleveland before being traded back to the Eagles, where he played two more years (1983-84).

Cowher began his coaching career in 1985 at age 28 under Marty Schottenheimer with the Browns. He became the fifteenth head coach in Steelers history when he replaced Chuck Noll on January 21, 1992.

In 1995, at age 38, he became the youngest coach to lead his team to a Super Bowl. At the time of his retirement, Cowher was only the second coach in NFL history to lead his team to the playoffs in each of his first six seasons as head coach, joining Pro Football Hall of Fame member Paul Brown. In Cowher's 14 seasons, the Steelers have captured eight division titles, earned ten postseason playoff berths, advanced to six AFC Championship games and made two Super Bowl appearances. On February 5th, 2006, Cowher's Pittsburgh Steelers won Super Bowl XL by defeating the Seattle Seahawks 21-10, giving Cowher his first Super Bowl ring.

Coach Cowher resigned in 2007 to take time away from the game and spend more time with his family. After coaching, Cowher spent time as a NFL analyst for CBS' NFL coverage.

Cowher was a keynote speaker at National Agents Alliance Leadership Conference in 2010.

Secure Bill Cowher for Your Event

Based on your interest in Bill Cowher as a speaker or for a personal appearance, Direct Sportslink has provided you additional links below for other sports talent with similar appearance fees, speaker topics, and categories that match Bill Cowher.