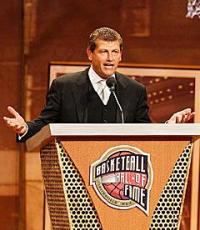 He is widely considered to be one of the best women's basketball coaches ever
Fee Range: $30,000 - $40,000
Secure Geno Auriemma
for Your Event

Geno Auriemma is the head coach of the University of Connecticut Huskies women's basketball team, in which capacity Auriemma has led the Huskies to numerous National Collegiate Athletic Association Division I National Championships.

Before Auriemma, the Huskies had posted just one winning season in their entire history. They quickly rose to prominence after Auriemma was hired in August 1985: they finished 12-15 in Auriemma's first season, his only losing season at Connecticut. Since then, Connecticut has finished above .500 every year including numerous undefeated seasons.

The team has been especially successful on its home court in the Harry A. Gampel Pavilion in Storrs, Connecticut; they tied an NCAA women's basketball record with 69 consecutive home wins between 2000 and 2003. Moreover, between Auriemma's arrival and the close of the 2005 season, they won 295 games versus just 31 losses. At Gampel, the team has set Big East Conference records for both single-game and season-long attendance.

Secure Geno Auriemma for Your Event

Based on your interest in Geno Auriemma as a speaker or for a personal appearance, Direct Sportslink has provided you additional links below for other sports talent with similar appearance fees, speaker topics, and categories that match Geno Auriemma.