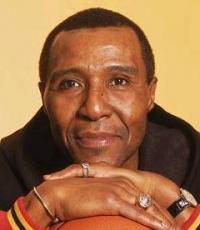 White played on the 1968 USA Olympic basketball team in Mexico, which went undefeated (9-0), beating Yugoslavia 65-50 in the title game. After the Olympics, White was drafted in 1969 in the first round by the NBA's Boston Celtics, who at that time had just won their 11th championship in 13 years. He would be the cornerstone of two Celtic championship teams in the 1970s (1973-74 and 1975-76).

White went on to become one of professional basketball's first "iron men", playing in all 82 games for five consecutive seasons during the 1970s. White's skills included great defense, speed, an underrated jump shot, and team leadership.

Since his retirement, White has been involved in basketball and has been the director of special projects and community relations with the Celtics, while continuing to attend most home games.

Based on your interest in Jo Jo White as a speaker or for a personal appearance, Direct Sportslink has provided you additional links below for other sports talent with similar appearance fees, speaker topics, and categories that match Jo Jo White.