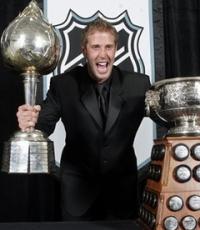 He won the Art Ross Trophy in 2006 as the NHL's top scorer; He is a six time All Star
Fee Range: Contact Us
Secure Joe Thornton
for Your Event

A Hart Memorial Trophy-recipient, Thornton was drafted first overall in the 1997 NHL Entry Draft by the Boston Bruins. He made the immediate jump to the NHL, debuting with the Bruins in the 1997-98 season.

The following season, Thornton was able to make a significant impact and improved to 41 points in 81 games, including a 9-point effort in 11 playoff games that post-season. He continued to build as a key player in the Bruins' lineup, culminating in his appointment as team captain in 2002-03.

Playing in his first game with the Sharks during the 2005 season, Thornton made an impressionable debut, hitting the crossbar and almost scoring in his first shift. Tallying 92 points in 58 games with the Sharks since the trade, Thornton helped lead the NHL with 96 assists and 125 points total to earn the Art Ross Trophy as the league's top scorer, the first player to do so the same season he was traded. In 2008-09, Thorton was named captain of the Western Conference for the 2009 NHL All-Star Game in Montreal.

Over his career, he has been named to numerous All Star teams. He also won a gold medla at the 2010 Olympics while playing with the Canadian National Team.

Secure Joe Thornton for Your Event

Based on your interest in Joe Thornton as a speaker or for a personal appearance, Direct Sportslink has provided you additional links below for other sports talent with similar appearance fees, speaker topics, and categories that match Joe Thornton.