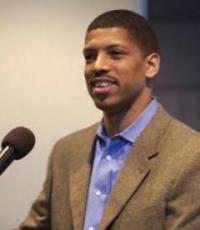 Kevin Maurice Johnson, known as "KJ"  was selected by the Cavaliers for the 1987-88 season after four years as a star at the University of California, Berkeley, where his number 11 is retired.

On February 28, 1988, Johnson was traded to the Phoenix Suns in exchange for Larry Nance where Johnson averaged 18.8 points and 9.5 assists a game for the next 10 years. He was selected an NBA All-Star three times and made the playoffs every year of his career.

The 1992-93 Suns, led by Johnson (despite missing 33 games due to injury) and power forward Charles Barkley, posted an NBA best 62-20 record. Narrowly escaping first round elimination versus the Los Angeles Lakers, the Suns made it to the NBA Finals, but eventually succumbed to the Michael Jordan-led Chicago Bulls in six games en route to the Bulls' third consecutive title.

Johnson retired after the 1997-98 season, but returned briefly during the 1999-2000 campaign to spell the injured Jason Kidd during the playoff run. Johnson helped the Suns win their first playoff series in five years (and their only series victory between 1995 and 2005). But after Phoenix fell in the second round to Los Angeles, he retired for the second and final time. After his second retirement, Johnson spent some time as a studio commentator for The NBA on NBC. Afterwards, he became Mayor of Sacramento, California.

Secure Kevin Johnson for Your Event

Based on your interest in Kevin Johnson as a speaker or for a personal appearance, Direct Sportslink has provided you additional links below for other sports talent with similar appearance fees, speaker topics, and categories that match Kevin Johnson.