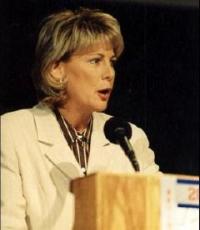 She is a member of the Basketball Hall of Fame; She is the youngest basketball player in Olympic history to win a medal
Fee Range: Contact Us
Secure Nancy Lieberman
for Your Event

From 1976 to 1980, Lieberman attended Old Dominion University in Norfolk, Virginia, and played on the women's basketball team. During that time, she and her team won two consecutive AIAW National Championships (1979, 1980) and one NWIT (Women's National Invitation Tournament) Championship in 1978. She was a two-time winner of the prestigious Wade Trophy, a national "player of the year" award in college women's basketball and was selected as the Broderick Award winner for basketball as the top women's player in America. Lieberman also won three consecutive Kodak All-America awards (1978,'79,'80)

In 1980, Lieberman earned a slot on the 1980 Olympic team but elected to withdraw from the squad in support of U.S. President Jimmy Carter's boycott of the 1980 Summer Olympics in Moscow.

In the 1980s, she dropped out of college to embark on a professional career in basketball. She played for several basketball teams and leagues, including the Dallas Diamonds of the Women's Pro Basketball League (WBL), then in a men's league called the United States Basketball League (USBL), and also with the Washington Generals, who served as the regular opponent of the Harlem Globetrotters.

In the newly-formed Women's National Basketball Association's (WNBA) inaugural year in 1997, Lieberman played for the Phoenix Mercury, even though she was 38.In 1998, she was hired as General Manager and Head Coach of the WNBA's Detroit Shock, a team she coached for three seasons.

In November 2009, Nancy Lieberman became the coach of the Texas Legends in the NBA Development League, an affiliate of the Dallas Mavericks, emerging as the first woman to coach a professional men's basketball team. She later became an assistant GM for the Legends and has spent time as a college basketball analyst for ESPN.

Secure Nancy Lieberman for Your Event

Based on your interest in Nancy Lieberman as a speaker or for a personal appearance, Direct Sportslink has provided you additional links below for other sports talent with similar appearance fees, speaker topics, and categories that match Nancy Lieberman.