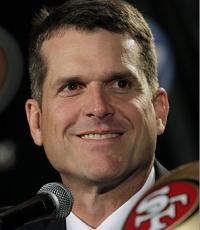 He is well known for his coaching success at both the collegiate level and NFL
Fee Range: $40,000 - $50,000
Secure Jim Harbaugh
for Your Event 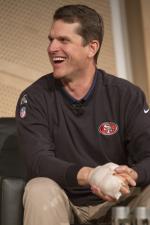 Jim Harbaugh at the Toyota Board of Governors Meeting

Direct Sportslink secured Jim Harbaugh for the annual Toyota Board of Governors meeting in San Francisco, California. Jim was the featured sports celebrity on a list of high profile celebrities participating with a moderated Q and A session hosted by Ben Stein. To secure Jim Harbaugh for any speaking engagement, personal appearance, or endorsement please contact a Direct Sportslink talent booking agent. We can provide you with Jim's availability, appearance fee, and secure jim Harbaugh for your next event.

Jim Harbaugh is a former NFL quarterback who played for the Chicago Bears (1st Round Draft Pick), Indianapolis Colts, Baltimore Ravens, San Diego Chargers and finally the Carolina Panthers of the NFL. He was drafted by the Bears out of the University of Michigan with the 26th pick in the first round of the 1987 NFL Draft.

Harbaugh was a four-year letterman at the University of Michigan and finished his college career in the top five in passing attempts, completions, completion percentage, passing yards, and touchdown passes for them. Playing for Bo Schembechler, he was a three-year starter and led the Wolverines to appearances in the Fiesta, Holiday, and Rose Bowl games. As a senior in 1986 he guided Michigan to a #2 national ranking while earning Big Ten Player of the Year honors and finishing third in the Heisman balloting.

In January 2005, Jim was inducted into the Indianapolis Colts Ring of Honor as one of the most successful and popular players in the club's Indianapolis era.

For his NFL career, Harbaugh played in 177 league games with 140 starts. He completed 2,305 of 3,918 passes for 26,288 yards with 129 touchdowns. He was nicknamed "Captain Comeback" (the second player to be so nicknamed after Roger Staubach) for his ability to win games in the fourth quarter after overcoming significant point deficits.

Secure Jim Harbaugh for Your Event

Based on your interest in Jim Harbaugh as a speaker or for a personal appearance, Direct Sportslink has provided you additional links below for other sports talent with similar appearance fees, speaker topics, and categories that match Jim Harbaugh.