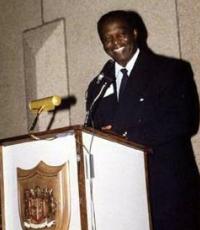 He is a member of the Baseball Hall of Fame; Upon retirement he held the MLB record for total stolen bases
Fee Range: $10,000 - $20,000
Secure Lou Brock
for Your Event

A Lou Brock personal appearance, Lou Brock speaking engagement, or Lou Brock endorsement will reflect well on your company. To hire Lou Brock now for any corporate appearance, fundraiser, motivational speaker event, personal appearance, autograph signing, or website endorsement please contact our celebrity agents at 1-877-6-SPORTS. We will contact Lou Brock or contact Lou Brock's agent and provide you with the booking fees and availability immediately upon your request. Direct Sportslink is the only sports speakers bureau and talent booking agency based in the United States securing only sports talent for corporations, associations, and organizations for motivational speaking engagements, personal appearances, and endorsements. We are the premier sports celebrity booking agency and a sports celebrity procurement expert. Accordingly, we will provide you with any relevant Lou Brock website information and booking agent details so that you can hire Lou Brock for your next event.

Blessed with great speed and baserunning instincts, Brock helped the Cardinals win the World Series in 1964 and 1967, defeating the New York Yankees and the Boston Red Sox, respectively, before a Series loss to the Detroit Tigers in 1968.

Brock held the record for career stolen bases (938) until it was broken by Rickey Henderson. He led the National League in stolen bases seven times, with his best year being 1974 in which he stole 118 bases (a new single-season record, also later broken by Henderson).

Brock was named the 1967 National League Babe Ruth award, the 1974 Major League Player Of The Year, the 1975 Roberto Clemente Award, the 1977 Lou Gehrig Memorial Award, and the 1979 Hutch Award.

He was inducted into the Baseball Hall of Fame in 1985. His number 20 was retired by the St. Louis Cardinals. In 1999, he ranked Number 58 on The Sporting News' list of the 100 Greatest Baseball Players, and was nominated as a finalist for the Major League Baseball All-Century Team. After retiring from baseball, Brock prospered as a businessman, especially as a florist in the St. Louis, Missouri area.

Secure Lou Brock for Your Event

Based on your interest in Lou Brock as a speaker or for a personal appearance, Direct Sportslink has provided you additional links below for other sports talent with similar appearance fees, speaker topics, and categories that match Lou Brock.