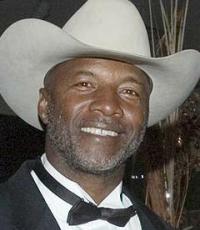 He was a six time All-Pro and won four Super Bowl Championships during his 14-year NFL career; He is a member of the Pro Football Hall of Fame
Fee Range: $5,000 - $10,000
Secure Mel Blount
for Your Event

Mel Blount was the prototype cornerback of his era and a major reason why the Pittsburgh Steelers were the dominant team of the NFL in the 70s. A third-round draft choice of the Pittsburgh Steelers in 1970, he had ideal size, speed, and quickness, plus the toughness and mental ability to adjust his coverage tactics to rule changes that favored receivers.

A Pro-Scouts All-American as both a safety and cornerback at Southern University, Blount became a starter in the Steeler secondary beginning in 1972, a season in which he didn't allow a single touchdown. Known for his rugged but clean style of play, his specialty was the "bump-and-run" pass defense.

Blount finished his career with 57 interceptions, tallying at least one in all 14 seasons of his career. He led the NFL in picks in 1975 with 11. He was named the NFL's Most Valuable Defensive Player in 1975 by the Associated Press, was a six-time All-Pro, played in five Pro Bowls, and won four Super Bowl Championships.

After his career, Mel became the Director of Player Relations for the NFL, serving from 1983 to 1990. He also became active in charity works, founding the Mel Blount Youth Home, a shelter and Christian mission for victims of child abuse and neglect, in his hometown of Vidalia (GA) in 1983. In 1989, he opened a second youth home in Claysville, Pennsylvania, just outside Pittsburgh.

Secure Mel Blount for Your Event

Based on your interest in Mel Blount as a speaker or for a personal appearance, Direct Sportslink has provided you additional links below for other sports talent with similar appearance fees, speaker topics, and categories that match Mel Blount.