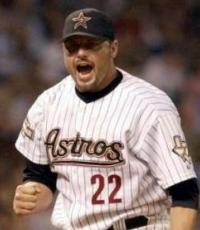 He won 6 AL Cy Young Awards; He won a NCAA Championship at Texas, He won 2 World Championships with the New York Yankees
Fee Range: $40,000 - $50,000
Secure Roger Clemens
for Your Event

The 6-foot-4, 215-pound Clemens grew up in Texas and helped take the University of Texas to the 1983 NCAA championship. He then entered the Boston Red Sox organization, joining the major league team during the 1984 season.

In 1992, Clemens led the league in ERA for the third consecutive season with a 2.41 average, and he was also the shutout leader with 5. A groin injury bothered him in 1993, when he went just 11-14 with a 4.46 ERA before going onto the disabled list with an inflamed elbow.

Clemens signed with the Toronto Blue as a free agent in 1997. He immediately returned to his old form, winning two consecutive Cy Young Awards with Toronto and winning 41 games against just 13 losses.

In 1999, the Blue Jays traded him to the New York Yankees because they couldn't work out a new long-term contract. He won his sixth Cy Young Award with the Yankees in 2001, when he had a 20-3 record. In 2003, he passed two major milestones, recording his 300th victory and 4,000th strikeout.

Early in the 2003 season, Clemens announced that it would be his last in the major leagues, and he was saluted by fans in his "final" appearance in every American League park, even Fenway, where, as a turncoat Yankee, he was not popular among Boston fans.

But his retirement didn't last long. In January of 2004, he decided to sign a one-year contract with the Houston Astros, because they were near his adopted hometown. On May 5 of that year, he notched his 4,137th career strikeout, putting him second on the all-time list behind Nolan Ryan.

Secure Roger Clemens for Your Event

Based on your interest in Roger Clemens as a speaker or for a personal appearance, Direct Sportslink has provided you additional links below for other sports talent with similar appearance fees, speaker topics, and categories that match Roger Clemens.