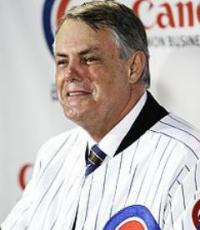 Lou Piniella, is nicknamed "Sweet Lou," both for his swing as a major league hitter and, facetiously, to describe his demeanor as a player and manager.

Piniella played for the Kansas City Royals from 1969-73, and was the American League's AL Rookie of the Year in 1969. He was the first player to come to bat in Royals history. On April 8 of their first season, he led off the bottom of the 1st against left-hander Tom Hall of the Minnesota Twins. He doubled to left field, then scored on an RBI single by Jerry Adair.

After retiring as a player, Piniella managed the Yankees from 1986 to 1987 and for most of 1988 before briefly serving as the club's general manager for the rest of the 1988 and 1989 seasons. Piniella managed the Cincinnati Reds between 1990 and 1992, a tenure that included winning the 1990 World Series against the heavily-favored Oakland Athletics.

He later went on to manage the Devil Rays and the Chicago Cubs.

Secure Lou Piniella for Your Event

Based on your interest in Lou Piniella as a speaker or for a personal appearance, Direct Sportslink has provided you additional links below for other sports talent with similar appearance fees, speaker topics, and categories that match Lou Piniella.