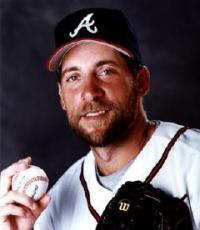 John Smoltz was drafted in the 22nd round and the 574th overall selection of the 1985 amateur draft. Before his debut, Smoltz developed in the Detroit farm system for a few years until August 12, 1987 when he was traded to the Atlanta Braves. In 1989, Smoltz had the first of what would be many exceptional seasons at the Major League level. In 29 starts, he recorded a 12-11 record and 2.94 ERA while pitching 208 innings.

Smoltz made his first of many postseason appearances in 1991. He pitched a complete game shutout in the 7th game of the 1991 National League Championship Series, propelling the Atlanta Braves to their first World Series ever.  The next year, Smoltz was the MVP of the 1992 National League Championship Series, winning two games and also keeping them in the 7th game, which the Braves eventually won in dramatic fashion. Over his postseason career, he has a 12-4 record and 2.72 ERA as a starter (14-4 overall). The Braves won the World Series in 1995.

Smoltz made his debut in baseball commentator in 2010.  He has been an analyst for the Braves, MLB Network, and TBS Baseball. Smoltz has also served as the Chairman of the Board at Alphraretta-based King's Ridge Christian School.

Secure John Smoltz for Your Event

Based on your interest in John Smoltz as a speaker or for a personal appearance, Direct Sportslink has provided you additional links below for other sports talent with similar appearance fees, speaker topics, and categories that match John Smoltz.