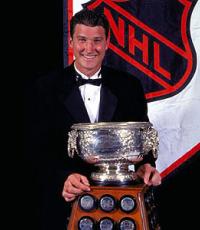 He won two Stanley Cups as a player; His number 66 is retired by the Penguins; He was inducted into the Hockey Hall of Fame in 1997
Fee Range: Contact Us
Secure Mario Lemieux
for Your Event

Lemieux is widely acknowledged to be one of the best players of all time. He played 17 seasons as a forward for the Pittsburgh Penguins of the NHL between 1984 and 2006. Since retiring he has been He the Penguins' principal owner and chairman of the board, having bought the team out of bankruptcy in 1999. He is the first person ever to win the Stanley Cup as both a player and an owner.

Lemieux led Pittsburgh to two Stanley Cups in 1991 and 1992, won a Stanley Cup as a chairman in 2009 with the Penguins, led Canada to an Olympic gold medal in 2002, a championship at the 2004 World Cup of Hockey, and a Canada Cup in 1987. He won three Hart Trophies as the NHL's most valuable player (MVP) during the regular season, six Art Ross Trophies as the league's leading scorer, and two Conn Smythe Trophies as playoff MVP. In 2004, he was inducted into Canada's Walk of Fame.

Playing only 915 out of a potential 1428 regular season NHL games, Lemieux's career was plagued by health problems. His numerous ailments included spinal disc herniation, Hodgkin's lymphoma, chronic tendinitis of a hip-flexor muscle, and chronic back pain so severe that other people had to tie his skates. He has retired twice because of his health (and also missed an entire season because of it prior to his first retirement): first in 1997 after battling lymphoma (he returned in 2000), and for a second and final time in 2006, after being diagnosed with an atrial fibrillation. Despite his lengthy absences from the game, his play remained at a high level upon his return to the ice; he won the Hart Trophy and scoring title in 1995–96 after sitting out the entire previous season, and he was a finalist for the Hart when he made his comeback in 2000.

The Hockey Hall of Fame inducted Lemieux immediately after his first retirement in 1997, waiving the normal three-year waiting period; upon his return in 2000, he became the third Hall of Famer to play after being inducted. Lemieux's impact on the NHL has been significant: Andrew Conte of the Pittsburgh Tribune-Review called him the "savior" of the Pittsburgh Penguins, and after Lemieux's retirement, Wayne Gretzky commented that "You don't replace players like Mario Lemieux [...] The game will miss him." Bobby Orr called him "the most talented player I've ever seen."

Secure Mario Lemieux for Your Event

Based on your interest in Mario Lemieux as a speaker or for a personal appearance, Direct Sportslink has provided you additional links below for other sports talent with similar appearance fees, speaker topics, and categories that match Mario Lemieux.