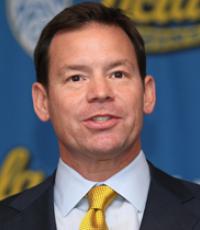 A Jim Mora personal appearance, Jim Mora speaking engagement, or Jim Mora endorsement will reflect well on your company. To hire Jim Mora now for any corporate appearance, fundraiser, motivational speaker event, personal appearance, autograph signing, or website endorsement please contact our celebrity agents at 1-877-6-SPORTS. We will contact Jim Mora or contact Jim Mora's agent and provide you with the booking fees and availability immediately upon your request. Direct Sportslink is the only sports speakers bureau and talent booking agency based in the United States securing only sports talent for corporations, associations, and organizations for motivational speaking engagements, personal appearances, and endorsements. We are the premier sports celebrity booking agency and a sports celebrity procurement expert. Accordingly, we will provide you with any relevant Jim Mora website information and booking agent details so that you can hire Jim Mora for your next event.

Mora was hired on as a quality control coach with the San Diego Chargers in 1985, moving up to coach the secondary in 1989. In 1992, he moved to the New Orleans Saints to coach under his father. In 1997, the Mora moved to the San Francisco 49ers to coach, and later become the 49ers' defensive coordinator in 1999.

In 2004, Jim Mora was hired by the Atlanta Falcons as their head coach. He led the Falcons to a record of 11–5 and a first round bye in the playoffs. Atlanta hosted and defeated the St. Louis Rams 47–17 in the divisional round, and advanced to the NFC Championship Game, where they lost 27–10 on the road to the Philadelphia Eagles. Mora turned to broadcasting after being released from the Falcons when he became a contributor to NBC's playoff coverage.

The Seattle Seahawks announced on January 21, 2007, that Mora was joining their staff as assistant head coach and defensive backs coach. Mora was officially named the seventh head coach in franchise history in 2009.

After his dismissal by the Seahawks, Mora accepted a position as a commentator with the NFL Network. In August 2010, Fox Sports announced that Mora would be serving as a color analyst on the network's NFL coverage for the 2010 season.

On December 10, 2011, the UCLA Bruins announced the hiring of Mora as head coach.

Secure Jim Mora for Your Event

Based on your interest in Jim Mora as a speaker or for a personal appearance, Direct Sportslink has provided you additional links below for other sports talent with similar appearance fees, speaker topics, and categories that match Jim Mora.