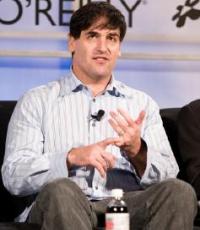 Working with Direct Sportslink on our Mark Cuban booking was easy, efficient, and professional. Their assistance with prepping Mark prior to the event and on-site presence at our event helped to ensure that was very beneficial to make sure everything went smoothly.

Mark Cuban is an American entrepreneur. He is best known for his ownership of the Dallas Mavericks, an NBA franchise;and Chairman of HDNet, an HDTV cable network.

Mark Cuban grew up in Mt. Lebanon, Pennsylvania; a suburb of Pittsburgh in a working class family; his father worked as an automobile upholsterer. Cuban's first step in the business world occurred at age 12, when he sold garbage bags in quantities of 100 for $6, in order to pay for a pair of expensive basketball shoes. While in school, he held a variety of jobs, including bartending, giving disco dancing lessons, and party promotion. He earned his way to college by collecting and selling stamps, and once gained about $1,100 from starting a chain letter.

In his early 20's, Cuban started a new company, MicroSolutions. MicroSolutions was initially a system integrator and software reseller. The company was an early proponent of technologies such as Carbon Copy, Lotus Notes, and CompuServe. One of the company's largest clients was Perot Systems. In July 1990, Cuban sold MicroSolutions to Compuserve then a subsidiary of H&R Block for $6 million. "After taxes, I walked away with about $2 million," Cuban said.

Cuban and fellow Indiana University alum Todd Wagner still eagerly followed college basketball and were interested in the development of the early Internet.

In 1995, Audionet was conceived with the idea of broadcasting live games and events through the Internet. With a single server and ISDN line, Audionet became Broadcast.com in 1998. By 1999, Broadcast.com had grown to 330 employees and annual revenues close to $100 million. With the stock market in the midst of the Dot-com boom, Broadcast.com was acquired by Yahoo!, and Cuban received about $5.04 billion in Yahoo! stock. After the sale, Cuban diversified his wealth to avoid exposure to a market crash. The strategy proved successful when the dot-com bubble ended, with stock prices rapidly falling, Cuban retained much more wealth than fellow dot-com entrepreneurs.

The Dallas Mavericks won the 2010-2011 NBA Championship beating the Miami Heat. If your company is looking for a motivational speaker who can speak from the heart about building a winning team, leadership skills, sales success, and how to overcome business challenges, Mark Cuban would be the ideal keynote speaker.

Secure Mark Cuban for Your Event

Based on your interest in Mark Cuban as a speaker or for a personal appearance, Direct Sportslink has provided you additional links below for other sports talent with similar appearance fees, speaker topics, and categories that match Mark Cuban.