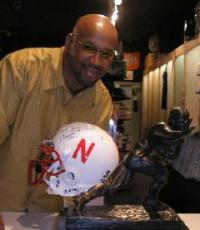 He won the 1983 Heisman Trophy Winner while playing running back for the Nebraks Cornhuskers; He is a member of the College Football Hall of Fame
Fee Range: $2,000 - $5,000
Secure Mike Rozier
for Your Event

Mike Rozier is a former college and professional footbal player who was born in Camden, New Jersey. In his senior season with Nebraska he was awarded the Heisman Trophy, given to the best individual player in college football. He starred in the famous 1984 Orange Bowl in which Miami defeated Nebraska 31-30. Rozier had 147 yards on 26 carries against a Miami defense that was one of the best in the country.

His first professional experience was with the Pittsburgh Maulers, a single-season (1984) franchise in the springtime United States Football League. When the Maulers and eventually the USFL as a whole folded, Rozier was free to pursue a career in the National Football League, which he did, primarily with the Houston Oilers.

Secure Mike Rozier for Your Event

Based on your interest in Mike Rozier as a speaker or for a personal appearance, Direct Sportslink has provided you additional links below for other sports talent with similar appearance fees, speaker topics, and categories that match Mike Rozier.