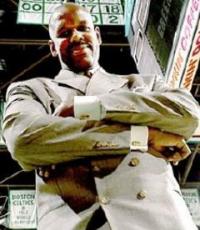 Nicknamed Cornbread, he is one of the fan favorites in Boston: He was a key member of two NBA Championship teams with the Boston Celtics
Fee Range: $2,000 - $5,000
Secure Cedric Maxwell
for Your Event

Cedric Maxwell, nicknamed "Max" or "Cornbread", played 11 seasons in the NBA, and played a key role in two championships with the Boston Celtics.

Maxwell was a star forward/center for the Charlotte 49ers. Among the 49ers, Maxwell's #33 jersey was retired in 1977. He led UNCC to the NCAA Final Four. Upon completion of his career at Charlotte, Maxwell was the 12th overall pick in the 1977 NBA Draft. He was drafted by the Boston Celtics, where he played for eight of his eleven seasons.

Maxwell made an impact in his second season with the Celtics. While Boston was mired in an otherwise awful 1978-79 season, as they awaited Larry Bird's decision to sign with the franchise, the second-year power forward averaged 19.0 points and 9.9 rebounds per game. The Celtics would go just 29-53 on the year, but the young Maxwell's potential, along with the promising addition of Bird and others, set the stage for what would become an NBA dynasty.

Maxwell, in addition to being a dangerous scorer and a colorful character, was a clutch performer in the playoffs. Despite being overshadowed by such stars as Larry Bird, Kevin McHale, and Robert Parish, Maxwell was named MVP of the 1981 NBA Finals. Three years later, Maxwell scored 24 points against the Los Angeles Lakers in the decisive game-seven victory during the 1984 NBA Finals. Before the game, he told his teammates to "climb on my back, boys." Maxwell's colorful side was also on display in the series as he mocked second-year Laker forward James Worthy's inability to make free throws during overtime of game 4 by walking across the lane between free throws with his hands around his own neck, suggesting Worthy's choking under pressure. Maxwell also made fun of Kurt Rambis prior to Game 4 of the 1984 Finals, wearing Rambis's trademark glasses and inadvertedly missing a long range shot in front of loyal Rambis fans known as the "Rambis Youth".

Maxwell was traded, with a draft pick, on September 6, 1985, to the Los Angeles Clippers for center Bill Walton. Maxwell spent a season and a half with the Clippers before being dealt to the Houston Rockets in January, 1987, for two draft picks. He finally retired from the NBA after the 1987-88 season, having scored 10,465 points and pulled down 5,261 rebounds over the course of 11 seasons, which averages over the course of his career to 12.5 points and 6.3 rebounds a game.

Maxwell was the 22nd former Celtic to have his jersey (number 31) retired by the Celtics on December 15, 2003. He has spent much of his post playing career as a radio analyst for the Boston Celtics.

Secure Cedric Maxwell for Your Event

Based on your interest in Cedric Maxwell as a speaker or for a personal appearance, Direct Sportslink has provided you additional links below for other sports talent with similar appearance fees, speaker topics, and categories that match Cedric Maxwell.