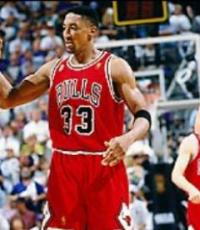 He is one of the 50 greatest NBA players ever; He was a key member of 6 NBA Championship teams with the Chicago Bulls
Fee Range: $50,000 - $75,000
Secure Scottie Pippen
for Your Event

HEAT MX is the largest health and fitness Expo in Mexico City, Mexico. They put their trust in Direct Sportslink when it came time to secure NBA legend Scottie Pippen. Direct Sportslink's agent traveled with Scottie to Mexico to make sure the entire appearance was as scheduled and delivered as promised. Scottie spent the first night mingling with sponsors at a VIP party. The following day Scottie made a personal appearance for HEAT MX by doing interviews with ESPN, judging a dunk contest, signing autographs, meeting guests and taking pictures with guests. Needless to say, the people in Mexico City were delighted to get a chance to meet 6-Time NBA Champion Scottie Pippen.

Scottie Pippen is a retired NBA player who is most remembered for leading the Chicago Bulls, together with Michael Jordan, to six championships and for being one of the best all-around players of all time.

Pippen grew up in Hamburg, Arkansas, attending college at the University of Central Arkansas. He was selected fifth overall in the 1987 NBA Draft by the Seattle SuperSonics, who immediately traded him to the Chicago Bulls for the eighth pick, Olden Polynice. The trade is regarded as a steal by the Bulls as Pippen would go on to become one of the Top 50 NBA players of all time.

The Chicago Bulls retired Pippen's jersey number on December 9, 2005 in a ceremony. The team played against the Los Angeles Lakers that night, and Pippen was reunited with Phil Jackson, Michael Jordan, Dennis Rodman, and Horace Grant during the ceremony.

Secure Scottie Pippen for Your Event

Based on your interest in Scottie Pippen as a speaker or for a personal appearance, Direct Sportslink has provided you additional links below for other sports talent with similar appearance fees, speaker topics, and categories that match Scottie Pippen.