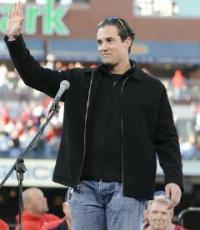 He was a an integral member of the 2008 MLB Champion Philadelphia Phillies and 2010 MLB Champion San Francisco Giants
Fee Range: Contact Us
Secure Pat Burrell
for Your Event

Nicknamed "Pat the Bat," Burrell attended the University of Miami, in Coral Gables, Florida. Following a standout collegiate career there, where he was the "Most Valuable Player" of the 1996 College World Series, finished second all-time in slugging percentage and won the 1998 Golden Spikes Award, Burrell was drafted by the Philadelphia Phillies with the first overall draft choice in the 1998 MLB draft. In February 2008, Burrell was inducted into the University of Miami Sports Hall of Fame.

Burrell debuted for the Phillies in 2000 as a first baseman, later moving to the Phillies outfield, where he became an instant fixture in the line-up. In 2000, he finished 4th in voting for 2000 National League Rookie of the Year.

In 2002, he had a break out season, hitting 37 home runs and knocking in 116 RBI, proving to be one of the most promising young power hitters in baseball. His 2002 year earned him 14th in National League MVP voting.

In Game 4 of the 2008 NLDS, Burrell became only the second Phillies hitter in their history to hit two home runs in a playoff game, the other being Lenny Dykstra (Ryan Howard would join the list later that month, in Game 4 of the World Series). He also became only the fifth National League player to hit two home runs in a series clinching game, joining Steve Garvey, Johnny Bench, Fred McGriff, and Carlos Beltran.

In 2010, he played an important role in helping the Giants win the Wold Series.

Secure Pat Burrell for Your Event

Based on your interest in Pat Burrell as a speaker or for a personal appearance, Direct Sportslink has provided you additional links below for other sports talent with similar appearance fees, speaker topics, and categories that match Pat Burrell.